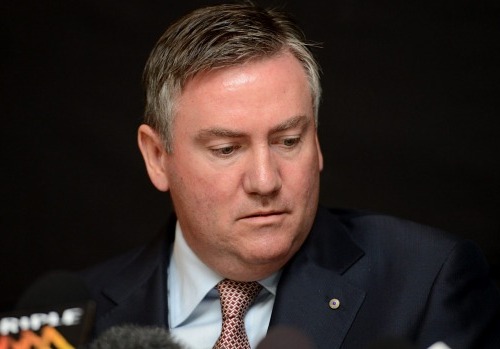 Eddie McGuire, the man who ignited the controversy (Pat Scala)

Late, as per usual, the Monday AFL press conference from Gillon McLachlan that was meant to be proactive on fixing an important matter ended up being an almighty fizzer.

The Age football writer Caroline Wilson was the victim of a “joke” led and essentially orchestrated by Eddie McGuire, but was ignited by James Brayshaw – and it was cowardly, incredibly immature, and downright wrong, once you read the whole conversation.

What was a golden opportunity for the AFL and the executive team to take a real stance against sexism, inappropriate comments and rude behaviour towards women in the game turned into a mumbling puddle of chaos. END_OF_DOCUMENT_TOKEN_TO_BE_REPLACED

The battle at the MCG on Saturday night between Collingwood and the Brisbane Lions, in some aspects, is a game-changer.

On the back of a 105 point belting at the hands of the Adelaide Crows, the young Lions brigade received a rude shock.  They cannot make finals, but they can ruffle the Magpies feathers if they bring an A-Game performance. END_OF_DOCUMENT_TOKEN_TO_BE_REPLACED

A jubilant Jobe Watson after his teams win (Source: AFL.com.au)

ANZAC Day once again provided a spectacular stage for football, and this time, the Bombers found something special in front of a huge crowd.

Red and black dominated the hallowed turf as Jobe Watson skippered an emotion-charged Essendon outfit to a romping 46 point victory over Collingwood on Thursday.

With a huge 93,373 packed tightly into the MCG, it took 15 minutes of game time before the goal drought was broken by Zaharakis.  Calamity ensued for the majority of the first quarter, as no one properly cleared the ball away from the contests and stoppages, with plenty of kicks intercepted.  Kicking “yips” plagued the Magpies throughout the game, with Jarryd Blair registering the black and white army’s first goal five minutes out from quarter time.  Sitting high on the back of an Essendon pack, Blair reached with outstretched arms, before going back and calmly slotting the ball through the big sticks.
END_OF_DOCUMENT_TOKEN_TO_BE_REPLACED

Sydney, Collingwood, Hawthorn and Adelaide are all one step away from the 2012 AFL Grand Final.  Their only way to get there: win this weekend.

Up against the Swans at ANZ Stadium tonight, Collingwood faces an uphill battle away from home.  The Swans have the benefit of the returning Heath Grundy, while Ben McGlynn is omitted due to his hamstring injury.  Collingwood loses Alan Didak to a calf injury, making way for Ben Sinclair.
END_OF_DOCUMENT_TOKEN_TO_BE_REPLACED

Week 1 of AFL finals action had its fair share of spoils.  Week 2 promises no different, with a thumping 96 point point win to West Coast over North Melbourne and Fremantle’s incredible 16 point win over Geelong gives this week an uncertain edge. END_OF_DOCUMENT_TOKEN_TO_BE_REPLACED