Here’s some stats about THAT Chris Gayle innings:
-He scored a six off every Zimbabwe bowler
-First 50 took 51 balls, he reached his ton in 105
-100-200 took just 33 balls
-He equalled AB de Villiers record of 16 sixes in an ODI game
-Chris Gayle is the ONLY player to score a T20I century, ODI double century and test triple century
-This is his second ODI ton or better in his last 21 innings

After 20 innings prior that yielded just one century and one half century, this innings was the Chris Gayle of old, the Caribbean destruction we all love to see. Perhaps Gayle’s biggest problem was his “nervous period” when getting an innings started, during the first 30 runs where a batsman finds it difficult to get started.

Manuka Oval witnessed none of that. The sheer destruction of Gayle’s innings wasn’t slogging; it was timing and it was brutal. His 50 was scored off 51 balls, and his century off 105. No-one saw what was coming, but many hoped.

It could have been far different, with a massive LBW shout from Zimbabwe first turned down, and then reviewed, unsuccessfully, due to “umpire’s call.” Unfortunatey for Zimbabwe, Gayle made them pay for not getting him out.

The West Indies team knew Gayle was ready to fire, just when was another question. Never mind that the win came against Zimbabwe; it was the innings that spread a fire throughout the Gayle critics camp.

ODI Captain Jason Holder, before the game against Zimbabwe, knew that there was something special to come from Gayle.
“Every time I see Chris Gayle I expect to see one Chris Gayle – and that’s a positive Chris Gayle.

“”While he hasn’t been getting runs, we still have confidence in him and I hope tomorrow he gets his eye in. It’s very good to see that he hasn’t fired, but we’ve still been getting 300 runs. 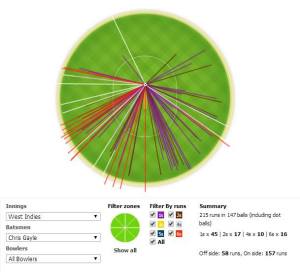 Holder’s words rang completely true. Gayle already has the career experience, and all it took to wake the sleeping giant was one simple innings. Much has been said when it comes to teams that rely too much on a “star” batsman or bowler, a la England’s James Anderson or Sri Lanka’s power duo of Mahela Jayawardene and Kumar Sangakkara.

Gayle fits in exactly the same bracket, with one exception; he scores when he feels like it, not as a routine. Batsmen like Jayawardene and Sangakkara do it day-in-day-out.

There’s part of why the West Indies damaged their image, hindering the side and giving them no room to move. For the first time in a while, Chris Gayle looked free, and he did it in style.

(This post in conjunction with Infinity Cricket.  The West Indies next game is 27 February against South Africa, in Sydney)

Australian Sport from the heart of a tragic