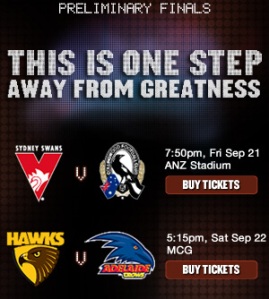 Sydney, Collingwood, Hawthorn and Adelaide are all one step away from the 2012 AFL Grand Final.  Their only way to get there: win this weekend.

Up against the Swans at ANZ Stadium tonight, Collingwood faces an uphill battle away from home.  The Swans have the benefit of the returning Heath Grundy, while Ben McGlynn is omitted due to his hamstring injury.  Collingwood loses Alan Didak to a calf injury, making way for Ben Sinclair.

Throughout the season, Sydney’s defense has been rock solid.  The likes of Ted Richards and Grundy have had outstanding seasons, while Lewis Roberts-Thomson’s big frame up forward has been a prime target.  The ever so skillful Adam Goodes and Ryan O’Keefe have been in the in the form of their lives in the back half of the season.  Their opponents, Chris Tarrant and Harry O’Brien, haven’t seen the best of times lately.

On the other end of the scale, power forwards Chris Dawes and Travis Cloke have begun to see some shining light in their form.  While Sharrod Wellingham, Dane Swan and Dayne Beams have all been playing extremely well, but will need to shake off being tagged against the Swans.

There is, however, some crucial history that needs to be scrutinised: the Swans have not beaten the Magpies at ANZ since 2005.  While the odds are seemingly stacked against Sydney in terms of past encounters, the home crowd should be a boost.  However, don’t discount the emotional Magpies, the death of John McCarthy sparking a massive turnaround against West Coast last week.

Prediction: Sydney will win this if they shut down the delivery to Collingwood in the forward line.

Australian Sport from the heart of a tragic